Provincial government perspectives were shared by Jennifer Burleigh, Director of the Trade and Export Policy Branch with the BC Ministry of Forests, Lands, Natural Resource Operations and Rural Development. On the heels of Minister of Forests Doug Donaldson’s “new model of forest management” discussion at the COFI Convention, she reiterated this provincial government’s “very different approach”.  Burleigh noted both Donaldson and Premier John Horgan’s “strong passion for forestry” citing the Coast Revitalization initiative and the recently announced Interior process as examples. Softwood lumber meetings with the National Association of Home Builders (NAHB) were tempered by acknowledgement of “no public interest” in the U.S.

COFI President and CEO Susan Yurkovich expanded on four challenges in BC’s forest sector today, specifically access to 1) fibre, 2) capital, 3) markets 4) talent. In accessing fibre, she noted increasing constraints on the timber harvesting land base. “We need to find a way to preserve the timber harvesting land base.” Yurkovich also expressed frustration with the punitive softwood lumber duties in the face of a lumber supply shortfall in the US: the lumber supply gap (“delta”) estimated at 14 billion FBM cannot be filled by domestic production.

Andy Rielly, President, Rielly Lumber Inc., and Chairman, Independent Wood Processors (IWPABC), and Executive Board Member, Western Red Cedar Lumber Association, fired up the audience which included majority of IWPABC’s 58 member companies. With an eye to SLA negotiations, Rielly emphasized the influential role of associations (“you don’t need an agent until you need an agent”). He highlighted the “double-whammy” facing the value-added sector: 1) re-manners are independent, non-tenured, non-subsidy companies and 2) the punitive application of the AD/CVD on the selling/border price instead of the first mill price. The association is advocating for a negotiated settlement “sooner rather than later” under a transferable quota-based system, with allocation of quota not based solely on historical shipment volumes (“new jobs here in BC are not coming from the primary”). 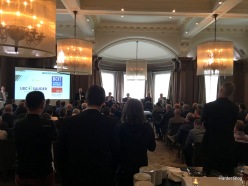