So far, touch wood, we’ve managed to keep the flu bug at bay around the Dakeryn office, despite the open office plan. We’re being told that the cold and flu-season tends to be worse where open office plans are in place. Other disadvantages of an open office include lack of privacy. While lumber trading floors have traditionally not been places for much privacy, it’s true that predictable tensions in a productive office can draw attention of the entire staff, leading to suspension of trading. And major incidents on the trading floor, while rare, have in the past reportedly involved costly downtime for clean-up, equipment repairs, and anger management classes. Still, it seems most trading floors have found that the disadvantages are eclipsed by these four benefits of an open office: 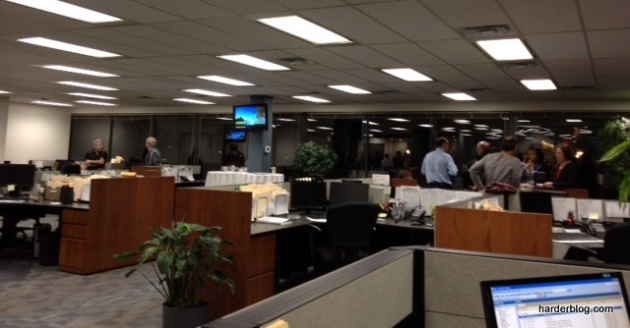 The North American Wholesale Lumber Association’s Vancouver Regional Meeting & Cocktail Party happens Thursday, April 10th at The Vancouver Club. Stay tuned for updates. Andy Dunn, President of the Vancouver Canadians Baseball Club, will be one of three compelling speakers on the agenda. Fans of the Canadians, Single A affiliate of the Toronto Blue Jays, are no doubt aware the club was chosen Minor League Franchise of the The Year in 2013, by Major League Baseball. NAWLA’s Vancouver Regional is expected to sell out just as quickly as last year; tickets available on-line here.