Cold enough for ya? In the language of lumber we’re often talking “hot” or “cold” when it comes to markets. Especially so these days.

The National Weather Service says that “a cold blanket of air with a strong cold front will keep temperatures 10-30 degrees below normal today across a large portion of the continent as far south as Texas. In addition, wind chill values are forecast to be minus 30F or lower across the Dakotas, Minnesota and Wisconsin.” Same thing in Nebraska and Iowa, causing some truss plants in the Midwest to put a freeze on production after the weather service issued warnings for wind chills of minus 40F. Extreme cold weather continues to impact rail car supply, in turn heating up competition for trucks.

The image below was provided by Rod Wiebe at Vedder Transport. When frost provided his daughters with some extra ice time in normal balmy southern coast areas, it’s as special as an outdoor game at Yankee Stadium in New York or Dodger Stadium in LA.

In the language of cold, even a gaggle of four-year-olds at our daughter’s birthday party Saturday was entranced with Frozen, the hot new movie from Disney. Speaking of which, I will be off the balance of this week.. in search of a sunny break in Anaheim.. 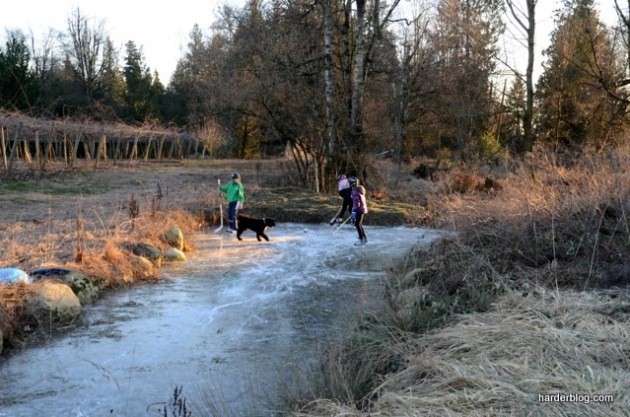