The season brings new beginnings. If you’re talking hockey, around here the Vancouver Canucks refer to the beginning of their season tomorrow under new head coach John Tortorella as a “reset”. At the same time, forest industry interests call their beginnings under new COFI President and CEO James Gorman a “redesign and re-invention” to keep pace with demands of an industry in transition. The Prince George Citizen reports that Gorman, previously a deputy minister in both the Education and Advanced Education ministries, earned the position over a number of industry-connected candidates. Says Nick Arkle, chair of the COFI board,”We’ve got an industry coming out of the worst recession it has ever seen. It is redesigning and reinventing itself. Maybe it’s time to re-engineer our own organization. The timing was perfect.” Adds reporter Frank Peebles, in the full story here: “With the Canada/U.S. Softwood Lumber Agreement up for renewal soon, harvesting tenure models to reform, a looming labour shortage, Asian markets to maintain and grow, emerging uses for wood from energy pellets to microscopic wood-plastics research leading towards a new set of forestry products, technological advancement in sawmilling, and the short-term timber supply numbers to crunch in the aftermath of the Mountain Pine Beetle, Gorman has plenty of issues to haggle over with any number of mayors and ministers.”
Going forward, COFI confirms above-all, short-term timber supply is the priority.. with tenure reform an attached secondary issue.

– The Williams Lake Tribune reports here that the forestry blockade in the Chilcotin by First Nations has been lifted, allowing Tolko and West Fraser to continue their work. It seems the blockade was lifted probably mostly in deference to moose hunters, leaving only the moose unhappy.
– Updated 10/3/13: Link to video clip of Mark Kennedy, CIBC Forest Products Analyst, on BNN this morning here.
– Harderblog will be off on vacation break through October 13th. Olé !

“October is the loveliest Canadian month. For some time frosts have been stealing down at night from the north and forcing that sad crisis in the woods – the death of the leaves. Nothing in nature is more memorable than the transformation which then takes place. The funeral rites of the Canadian trees are celebrated with pageantry of startling gorgeousness. Gradually the dark, sultry green of the summer foliage is changed into many lighter, gayer, more vivid hues. Each day the wonder grows until in the first half of October it reaches its climax.”
– Malcolm MacDonald, British High Commissioner to Ottawa (1947) 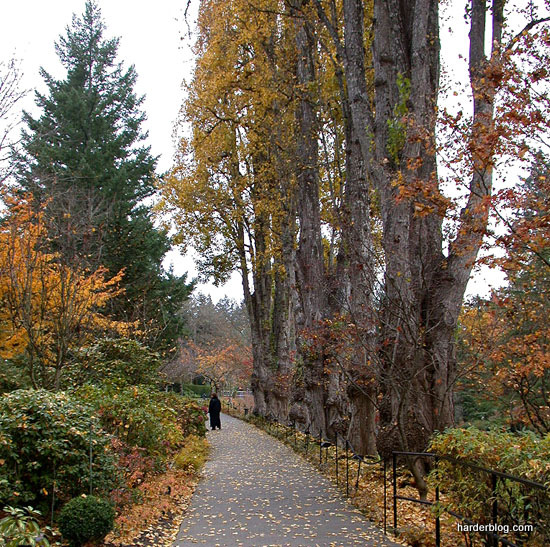