The Touch Wood Sculpture Exhibition opened yesterday at the magnificent VanDusen Botanical Garden here in Vancouver. The idea of getting lost in a maze of trails encircling numerous lakes and ponds, carved into the lush grounds, seemed timely – a tranquil escape from turbulent markets. So upon leaving the office I picked up my two little daughters and off we went. With map in hand, we set out in the mist and fog in search of over two dozen sculptures and installations by 10 prominent B.C. artists – wooden treasures buried in secluded locations deep within the 22 hectare garden. Lauren and Evie also managed to find every single puddle along the way! I took the following photos of some of the wonderful works we saw – all made from salvaged, recycled, or scavenged wood; wood not converted to lumber – but beautiful art, which will forever hold its value… 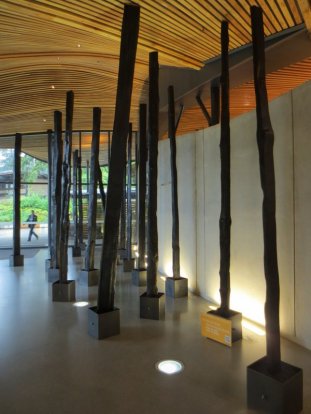 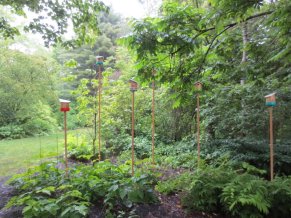 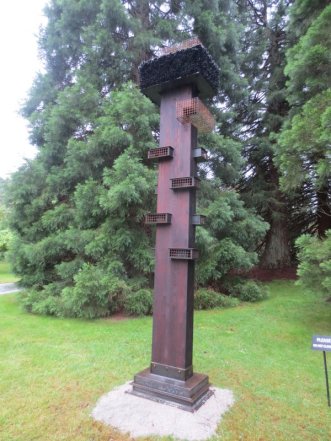 “The Wild Place” – by Steve Paterson 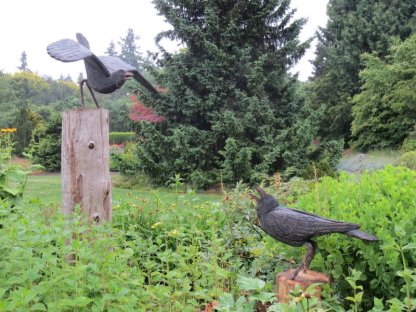 “Council of Elders” – by Michael Dennis

In an interview earlier this month with Bloomberg, West Fraser CFO Larry Hughes suggests part of the reason for the steep decline in lumber prices this year was that they rose too quickly late in 2012 and into the first quarter. He points out, in the full story here, that blogs about the lumber industry “were full of fear of (fibre) shortages” back in January.

More recently, discussion surrounding the scarcity of fibre supply has become more muted. And while the U.S. housing picture continues to look positive, the lumber market collapse this spring serves to remind it’s a global play now – as compared with years ago when it seemed all the analysis was predicated primarily on the U.S. housing market. When prices climb, lumber as a commodity finds extra supply available: mills reopen,  add shifts, build more mills, areas that were too remote to haul timber from become more economical etc etc.  .. And that’s just here in B.C.!

Still, the bullish headlines keep coming. For example, The Globe and Mail declares the lumber super cycle is now imminent (is it fair to characterize “by the end of 2014” imminent?). More than one forestry stock analyst has told us “If this is a baseball game, we’re in the third inning.” Traders certainly hope this is a game where the realities match the hype.

The NAHB/Wells Fargo Housing Market index passed the tipping point of 50 in June to top out at 52, the highest level since April 2006 and the largest monthly increase since 2002. The renewed confidence was spread across all three components, with the expectation for the next 6 months rising to 61, the highest in seven years.

The index compares the share of builders who believe the market is better with those who believe it is poor. The index flipping over 50 means builders seeing a better market outnumber those judging it as poor. In the 29 years of the HMI, it has been at 50 or more 58 percent of the time but for never longer than three years until this most recent seven year run below 50.

The causes are several. Builders are seeing more serious buyers, some coming from the existing home market because that…

Some candid images from last evening at the Terminal City Club in Vancouver.. what a night!

This video at YouTube is filed under “How Construction Works in Other Parts of the World”. Less impact on neighboring properties? 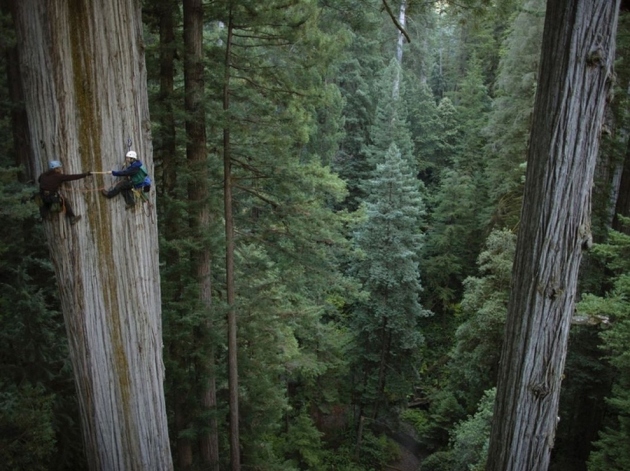 “The redwoods, once seen, leave a mark or create a vision that stays with you always. No one has ever successfully painted or photographed a redwood tree. The feeling they produce is not transferable. From them comes silence and awe. It’s not only their unbelievable stature, nor the color which seems to shift and vary under your eyes, no, they are not like any trees we know, they are ambassadors from another time.”
– John Steinbeck, Travels with Charlie: In Search of America

Photographer Michael “Nick” Nichols describes how his team of researchers and technicians made a unique composite image of an entire redwood tree here. Lots of interesting redwood facts available at National Geographic here.

In the face of low inventories and accelerating prices in many U.S. housing markets, there are reportedly growing concerns that “rich home buyers from abroad are crowding out American families”.  Of course this is a familiar theme here in Vancouver, home of Canada’s most expensive neighborhoods.  So I read with interest a post from a California-based reporter who notes (with raised eyebrows) several provisions within the massive U.S. immigration overhaul bill aimed not at easing, but attracting foreign home buyers.

In Canadian Home Buyers in America – from Saviours to Carpetbaggers? Erica Alini points to a clause that allows those 55+ who own or rent a home in the United States to stay there for up to eight months per year without a visa, rather than six, before losing non-resident status for tax purposes. And in what Alini describes as “a welcome treat for well-to-do Canuck pensioners”, the bill also introduces a special retiree visa for seniors who can make a cash purchase of a U.S. home worth US$500,000 or more. While the author acknowledges that investors – domestic and foreign – are a big reason why home prices rebounded in the first place, she concludes that if the grumblings about foreign buyers increase, these provisions could start to look like “a low hanging fruit fix”.

The countdown is on for the 33rd Annual BCWLA Lumberman of the Year Roast at the Terminal City Club in Vancouver. The recipient of the 2013 B.C. Wholesale Lumberman of the Year Award is Tom Davis, lumber buyer extraordinaire at Taiga Building Products Ltd. Having had the good fortune of working with Tom from 1992 to 2010, Harderblog recently had a chance to sit down with Thursday’s guest of honour:

1) How did you get into the business, Tom?
In the summer of 1969, I was working as a car hop at the White Spot here in Vancouver at Burrard and Robson, and had applied at BCIT. The day my letter of acceptance arrived from BCIT, my mother phoned me at the White Spot with the news. That lunch hour, I served a group of people from Balfour Guthrie which included Vice President Peter Hall. When he was conducting interviews at BCIT two years later, he remembered me. I was not hired for the position because I had no experience (they hired Bill Braaten instead), but he liked my enthusiasm; if I was willing to go to Prince George and work in their mill they would hire me as a trainee. I worked in the planer, under the sawmill on cleanup, ran lines in the bush, burned slash, did local sales, and any other jobs when they needed someone. I had a brief opportunity to work with Reno Gobbi, a well-known lumber salesman. When Morey Mackay went to Widman Industries, I was brought back to Vancouver. Forty-two years later…

5) Does one particular lumber purchase stand out over the years?
Last year we had 40 truckloads 2×4-8’ Sinclar Premium Studs on order when I learned of the tragedy at Lakeland Mills on my drive to work. We cancelled the order.

6) What is your fondest memory at Taiga?
The period from 1987 to 2000.. when the company was in wholesale and distribution. We had a lot of fun everyday, even when the market stunk.

7) What’s the biggest change you’ve seen in the industry?
From telex to email and smartphone.

10) Lumberman of the Year is quite the honour, congratulations. Any plans to retire?
No – rewire.

As the forest fire season heats up, reminders for taking all possible precautions are worth heeding.  One costly campfire that lead to a wildfire in the woods has already ended up in court, after the Ministry of Forests charged a Cariboo-area man the full cost of their firefighting efforts — $861,356.

In an interview yesterday, Brian Simpson, director of the B.C. Wildfire Management Branch, said “If you look at things like temperature, drought conditions, wind conditions, we’re finding now there are periods during our fire seasons that are much higher-risk than we have historically experienced. We’re getting to these much higher intensity fires much more quickly than in the past. We need to be prepared much earlier. If you go back 10 years, our crew organization, preseason preparation, never really got cranked up until the middle of April. We are doing that now at the beginning of March” (Source). The current fire situation across the province is available at at the Wildfire Management Branch website.

After being immersed for two months in a market at least one trader likened to chasing a rock while skydiving, most lumber wholesalers probably aren’t looking to take another bath for a while. Even still, while some lumber buyers might be wondering if it’s finally safe to go back in the water, UBC’s Dean of Forestry John Innes argues it’s always a good time to bathe in trees. In fact Inness and co-author Farah Shroff tell us here in The Tyee “significant evidence exists for health improvements based on visiting forests, so physicians around the world are increasingly recommending that patients exercise or spend time amongst trees.” The writers convincingly argue that better forest management and conservation in B.C. would yield great potential for population health improvement. 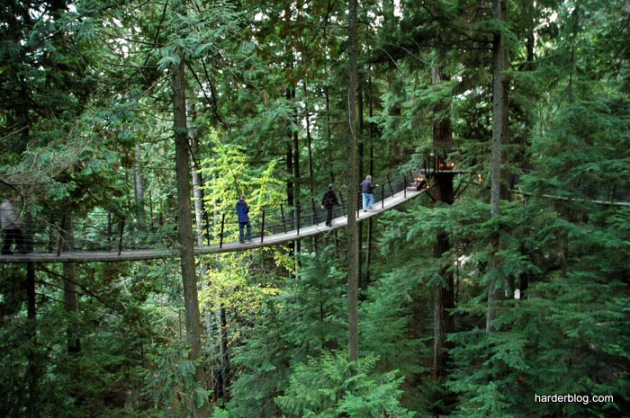