I attended NAWLA’s Regional Meeting yesterday afternoon at The Vancouver Club.  There was a great turnout at this classy venue.  Gary Vitale, President of NAWLA, opened the meeting at 3:40pm, and three excellent presenters followed:

Daryl is a ranked analyst covering the Paper and Forest sector equities at Raymond James.  His presentation largely focused on the coming “super cycle” due to depleted fibre supply (pine beetle), growing demand from China, and the eventual housing recovery in the U.S.  His complex forecasting model projects that when the number of foreclosures begins to decrease by next year, housing starts in the U.S. will begin climbing – to 700,000 in 2012 – returning to a “healthy average” of 1.4 million by 2014.

As for equities, he felt the anticipated increase in lumber demand for reconstruction in Japan might be overreaching, and he now anticipates a modest correction in forest sector stocks.  However with his prediction of a super cycle, his long term forecasts for these stocks are lofty indeed!

I met Oscar years ago when he was Sales Manager at The Pas Lumber Company, so I was looking forward to his presentation.  His talk focused on the “Woodworks” project of the Canadian Wood Council, “a national campaign to increase the use of wood in commercial, industrial and institutional construction.”

The most recent development is changes to the building codes allowing for multi-storey wood frame construction, offering “sustainable densification.”  Oscar shared many photographs featuring multi-storey wood frame and “hybrid” construction from his business travels around the world.  He feels densification in North American cities, ie building higher within existing infrastructures (rather than traditional new land/subdivisions/spec homes) is beginning to happen now, and is the future where new housing is concerned.

Prior to L J Resources, Jim spent 7 years in sales with Canfor, building ties and marketing lumber to China and throughout Asia.  His presentation centered upon the huge demand in the face of a wood shortage there.  A ban on logging in China’s largest forest for the next ten years sees  China literally buying any wood fibre they can get their hands on – from logs (“they will buy any available log”) to finished 2×4’s for concrete forming, to wider widths which are ripped into strips in China.  Jim explained that in China, a new apartment is essentially an unfinished concrete space, so these strips are primarily used to complete the inside to the owner’s specifications.

Jim’s projections for exponential growth in China through 2025, the development of more and more “super cities” etc etc was mind-boggling!  It’s still early days as fragmented distribution networks from the Pacific Northwest continue to evolve – he spoke of the exclusive “program clubs” through which the BC majors  market much of their production to China – “spot” wood is in scarce supply.

I traveled to Beijing in 2004 and 2005, and in talking with Jim afterward, he told me that with the explosion in growth since then, I “wouldn’t recognize it” today. 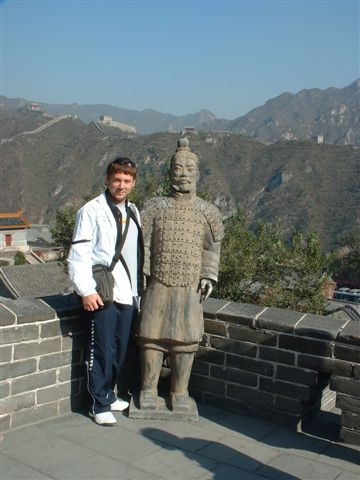 With a Terracotta Soldier, The Great Wall of China - 2005